Marlene Dietrich at her best, in songs new and old including two favorites from "The Blue Angel"...Exciting live performances recordings made during her triumphant return tour of Germany...With the orchestra of Burt Bacharach.

WIEDERSEHEN  MIT  MARLENE...Reunion with Marlene! Probably the shortest introduction ever given an international celebrity. But more words would have been superfluous.

Munich's Merkur called her appearence "majestic as a reigning  Queen of Love." Deutche Zeitung commented, "For the next hour and more we sat enchanted by this inimitable mixture of sex and sensibility, sauciness and clowning, wit and discipline. Even through the most sentimental of her songs there sparkled a tiny breath of intimate irony that raised her audience's enjoyment to the level of a revelation."

"The Blue Angel," Marlene Dietrich's first unforgettable film, was made in Berlin in 1930; then she went to even great fame and fortune in Hollywood. In 1934, appalled at Hitler's inhumanity, she applied for America citizenship. During thewar she spent three years performing for Americans troops overseas and was honored with the Medal of Freedom.

Before her Berlin opening in May 1960, Miss Dietrich had no faced a German audience for twenty-nine years. It was an exciting reunion, and from the first bar of her first song there was "jubilation in the hall" for this "reunion with a woman who has about her the aura of Berlin... a reunion with a sound that was more than the effect of her song - it was the sound of an epoch" (Berlin Tagesspiegel). PRODUCED IN THE U.S.A. by DAVE DEXTER,JR.

SIDE ONE
Ich bin von Kopf bis Fuß auf Liebe eingestellt(Falling in Love Again) (from "The Blue Angel")."I am tuned in for love,from head to toe; that's my world, and nothing else matters. Men swarm around me like moths around a flame, and if they burn, I'm not to blame. It's my nature---I can't help it."

Ich bin die fesche Lola (I'm Naughty Little Lola) (from "The Blue Angel"). Miss Dietrich offers to sing another song from her first Josef von Sternberg film: has her audience forgotten this? Od course not! DieLola! "They call me naughty Lola, the wisest girl on earth; at home my pianola is layed for all it's worth! The boys all love my music -I can't keep them away. So my little pianola keeps working night and day!"

Wer wird denn weinen. Miss Dietrich introduces  the song that got her into the movies. She sang it as a drama student when shewas sentto audition and told to take along a song that was "bold" (frech), "Who'd want to cry when he says goodbye to one sweetheart, since another one is waiting at the next corner? You say 'Auf Wiedersehen,' but you think 'Good riddance'."

Mein blondes Baby. With a smile Miss Dietrich remind us that she also sings tender songs: "Blond hair and dark blue eyes - I sent them before me wherever I go, and a child's little smile haunts my dreams. Life will go on, and some day you'll be alone—but my heart will be with you forever, understanding you, crying with you. You can't understand this yet, because your soul is a baby too. My blond baby—don't forget me."

Peter. One of Miss Dietrich's first songs: " Peter, how could I have been so stupid as to leave you? You were the best I've ever had. I could call and wake you  up and say "Peter, I'm out of cigarettes; and you'd say, 'I'll be right over!" Peter, I was so bad—but now I know, and I cry for you."

Allein (Alone). “We live in a big city, and yet we are all alone! The man you long for hasn’t come yet, but all the while you know him very...Suddenly you stand there facing him, and don’t know what to say—everything sounds so trite! But his eyes say he has understood you long ago... All is hapiness until the first quarrel. Suddenly he shouts and you don’t know what to say. It’s the end...a world crumbles and you’re alone.”


SIDE TWO
Wenn ich mir “was wünschen dürfte. Another song by Friedrich Holländer, written while he was composing the songs for “The Blue Angel”: “No one asked us, before we were born, whether we wanted to live...Iwalk alone in a big city not knowing wheter there’s anyone anywhere who loves me, If I could wish for something I wouldn’t know what to say , what to wish for. Maybe I would ask to be just a little bit happy, because if I had too much happiness I might be homesick for the sadness of now.”

Johnny, wenn Du Geburtstag hast. “Johnny, when it’s your birthday, I will spend the night with you. But until then I dream of you: please do come to see me in the afternoon at 3:30. Oh, Johnny! Once I’ve been in your arms I’m sure I’ll wish that you had a birthday everyday of the year!”

Marie-Marie. In this new song by Becaud. Delanoe and Kolpe, a girl reads a letter from her boyfriend in prison: “Marie, the say I’ll be free in the spring; I can hardly believe it, I’ll be so happy! When will you send a letter for Number 2104? I often think of the house and garden, and of my mother, so weary of waiting...Marie I’ll be free in the spring and I’ll never leave you; then this loneliness will be forgotten by Number 2104.”

Lili Marlen. If any single song represents World War II it is this one, which was sung by the Germans as early as 1941, spread to both sides of the lines, and by 1944 was a favorite in the U.S. The idea is universal: a soldier on the front lines reminisces fondly about the girl back home whom be used to meet by a certain lamp post every evening, “But nowwhendusk falls, who is standing beside you by the lamp post. Lili Marlen?” There couldbe no more pathetic commentary on war’s tragedy than this simple ballad.

Ich weiss nicht, zu wem ich gehore. Another by Holländer, which Miss Dietrich says is to be sung with a smile: “I am too precious for one person; if I swore to be faithful to you, I’d make another man terrible sad. Should anything so beautiful happen to anyone?  As long as the sun and stars belong to everyone Ishould belong to all of you, because I don’t know whom:  belong to; maybe I belong to myself alone.”

Ich hab’ noch einen Koffer in Berlin. “I still have a trunk in Berlin, and that’s why I must go there some day. All my memories are in it—the happiness of bygone days. So when my longing gets too strong, I’ll go back there to find the trunk that I lleft in Berlin.” 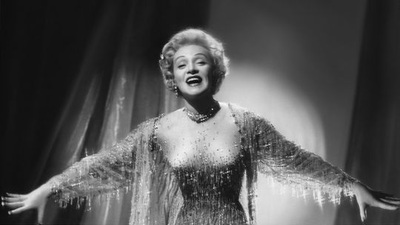 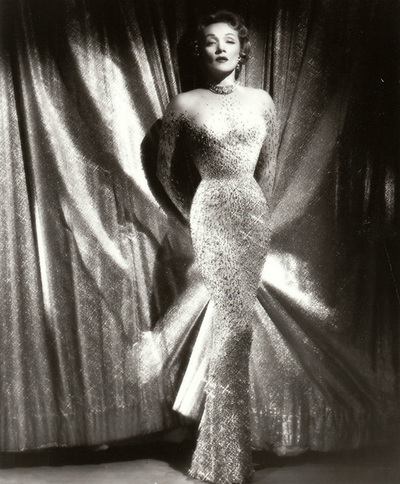 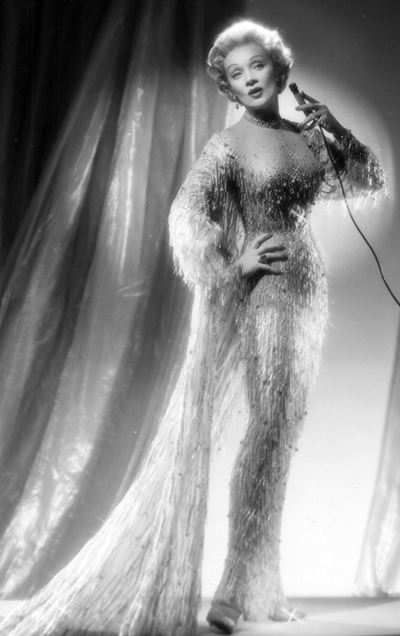