Maria Magdalene Dietrich was born December, 27, 1901, in Berlin. (1902 and 1904 are frequently given as birthdates,as is the surname von Losch, the name of Marlene stepfather; Marlene was simply a contraction of Maria Magdalene.) Her father was a military officer who died  when Maria was 11. "I am a Prussian, "Dietrich once said. Disciplinewas everything on a Prussian household; that same discipline that enabled young Maria to study the violin, or to submit to the endless rigors of working in film without a word to complaint.

Marlene actually playedthe violin professionally for a few years, mostly in theatre orchestras and in the smallvensembles that provided mood music for silent films. The next step was to acting companies such as Max Reinhart's followed by work on screen in the movies themselves... more than a dozen silents, before bringing Emil Jannings to his knees in the classic "Blue Angel" in 1930. Josefen von Sternberg immediately brought her to America, where she was groomed for stardom and put to work in "Morocco" and "Dishonored." "Blue Angel" was released in between the two American productions, and all three appeared between November 1930 and March 1931. Von Sternberg would direct Marlene Dietrich in four more films:"Shanghai Express," "Blonde Venus," "The Scarlet Empress,"and "The Devil is a Woman,"with Rouben Mamoulian's "Song of Songs" sandwiched in between. Other film classi s included "Desire," "The Garden od Allah,"and "Destry Rides Again." Dietrich's films in the forties were less memorable; those in the fifties and sixties are hardly worth mentioning, except "Witness for the Prosecution" and "Judgement at Nuremberg."But by this time, Marlene Dietrich was a stage legend,more glamorous than ever.

As a recording artist, Marlene Dietrich first performed as part of the cast of a 1928 Berlin revue,"It's In the Air." Her first solos were of the songs from "The Blue Angel," four songs by Friedrich Hollaender, all recorded in separete German and English versions. The english translations quite often tell a different story from the German originals: "Falling in Love Again," in German, was "Ich bin von Kopf bis Fuss aub Liebe Eingestellt" (From Head to Toe, I'm Made for Love). "Kinder, Heut Abend, da such ich mir was aus," in its English versinon, was titled "This Evening,Children," words which never once appeared in the song;a more accurate title would have been "I Gotta Get A Man." (Blonde Women" and "Naughty Lola" were closer to their German originals).

In 1931, Dietrich recorded "Give me the Man," from "Morocco,""Petter," and "Jonny," the latter reprised in the film "Song of Songs" in 1933 and part of her night club act through the fifties. Peter Kreuder directed the orchestra, as he did on the Paris sides made two years later. Two delightfull French numbers. "Assez" and "Je m'ennuie" came from this session, as did the dramatic "Allein in einer Grossen Stadt" (Alone in a Big town) and the Jazz "Wo ist der Man." "Hot Voodoo" was the feature number in the 1932 film "Blonde Venus," with Dietrich strip-teasing her way out of a gorilla suit.

By the time of her 1939 recordings, the Dietrich voice was pitched much lower than at the beggining of the decade; she reprised "Falling in Love Again" (the original 1930 English version is on ProArte CDD 509) and immortalized "The Boys in the Backroom" from "Destry Rides Again." And in the rarest recording in this ProArte set, Marlene parodies "Boys in the Backroom" on a disc probably intended as a souvenir for the company of "TheLady is Willing," produced and directed in 1941 by Mitchell Leisen.Warning: Parental Guidence on this last track! Not listed in discographies, virtually unkonwn among collectors, the disc was pressed in a limited quantities and a typed, pasted label attached, reading "(unpublished) PARODY: MARLENE DIETRICH." (Another rarity, a 1934 disc of songs from "The Devil is a Woman,"has eluded us, but one can always hope.)

The original recordings digitally restored in this ProArte Collector's Series release were made more than a half a century ago. Even allowing for the techiniques in use ata the time, the producers feel that the performers can now be heard to better advantage than ever before,thanks to present-day refinements in the production of older recordings.

In recapturing the original greatness of legendary artists, no effort was spared to fin the best possible original copies. Careful examination of the grooves was made, with poper styli fitted to match the original. Original discs were carefully centered to ensure the total absence of wow and flutter.

Equalization was used to ensure a wide-ranged, high fidelity sound, often not heard when these records were brand new. Where it was deemed advisable, a small amount of reverberation was applied, to compensate for the small studios often used in making records during The Depression. Extraneous noises such as surface glitches and clicks were removed. And finally, the recordings were left in their original and properly balanced MONAURAL state. The result? A restoration of genius, digitally enhanced, in sound superior to anything thought possible when these performances were originally engraved for posterity.
FOTO
A foto da capa parece ser um desenho de uma foto da Marlene no filme Marrocos. O desenho foi feito pela artista Linda Haas Baliko.  A foto mais aproximada que encontrei foi a seguinte: 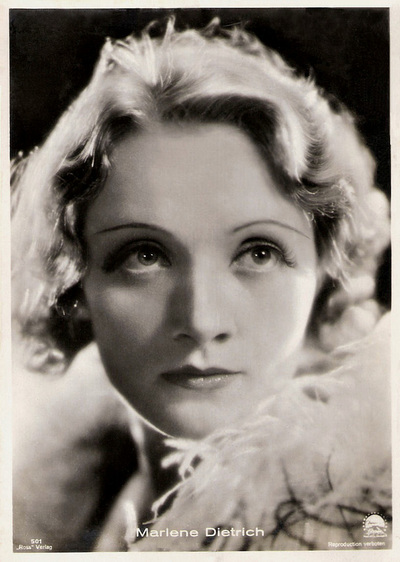